How Cannabis Helps Me Cope with the Pain of Endometriosis

Linn is a 33-year old mother living in Winnipeg, Manitoba. She lives with endometriosis, a painful condition that occurs when the endometrium – the tissue that naturally grows inside the uterus – begins growing outside of it. Endometriosis can spread to other organs, and often presents with severe pain and nausea. Although endometriosis affects an estimated ten percent of Canadian women, it is poorly understood and there is no cure. For some, cannabis can help. Here is Linn, in her own words.

My name is Linn, and I have been dealing with endometriosis for about six years. It started after the birth of my daughter. My period cramps were excruciating, but I was told that was normal after childbirth, so I tried to just deal with it. Fast forward a few years, and I developed severe food allergies to food bleach, something I had eaten all my life. Doctors said these types of allergies generally are an indication of other health concerns, but other than my cramps, I felt healthy.

Around this time, I started getting pains at times other than my period. Eventually I went to the emergency room. It took three visits within a two-week period, and finally on my third trip they did an ultrasound. They found a 10-cm cyst on my left ovary. I was referred to a gynecologist for surgery to remove it. The gynecologist told me he suspected endometriosis, but would need to do surgery to confirm.

The surgery went well. Doctors removed my left ovary and fallopian tube and removed endometriosis tissues from my pelvic wall. I was prescribed hydromorphone, an opioid painkiller, to treat the pain. The hydromorphone made me nauseous and extremely itchy, so I had to take gravol and benadryl with every dose.

Eight months later the pain was back. Over-the-counter medication was not helping, and my body didn’t handle narcotics well. I had heard about people using cannabis to treat pain, so I gave it a shot. It worked so well, but I was afraid of getting in trouble or being judged, as I had a small child in the home. I asked my doctor if he could prescribe it, but he said I should just find it on my own, as he didn’t feel the stuff I could get legally would be worth it.

My disease got worse. I was in pain all the time, and regularly nauseous. My stomach looked like I was six months’ pregnant almost every time I ate anything. I tried physiotherapy and hormones, but nothing was working, so I was scheduled for a full hysterectomy, which included removing my remaining ovary and tubes, cervix, uterus and the lining of my bladder.

Shortly before my surgery, my pain became unbearable. I went to the ER where I was given hydromorphone again. It was awful. I was so sick. I went home and started looking into how to get a cannabis prescription without my family doctor’s help, but I was having a hard time understanding it all. I had my surgery, where they discovered that I had stage three endometriosis, as well as adenomyosis, which is similar to endometriosis, but occurs within the muscle lining of your uterus. After surgery, I was again sent home with narcotics. I was in so much pain, and on top of that, I was sick from the medication, too.

My hysterectomy did not achieve what we had hoped. I am still in pain every day, to this day. It is suspected that some endometriosis tissue was missed, so the hunt for some relief was on again.

I ended up finding a Facebook group called SheCann, and it saved my life. There were all these women talking about treating endometriosis and other conditions with cannabis. They helped me with everything, including finding a clinic here in Winnipeg, National Access Cannabis. I was able to print off a referral document and bring it to my doctor. I told him all about the women I had spoken to, and their success treating endo with cannabis. He was more than happy to fill it out for me. It turns out he was initially uncomfortable prescribing cannabis because he didn’t understand it, so he had brushed it off when I first asked.

I got my appointment at National Access Cannabis, and saw a doctor there who prescribed me CBD oil for daytime and THC flower at night. Before SheCann, I had never even heard of CBD, and I used to think the only way to consume cannabis was by smoking it. My mind was blown with all these new possibilities. I could medicate and go to work without being high? It was an incredible feeling after so many years of suffering.

I have now been taking CBD oil twice a day for three months, and I smoke a THC strain before bed. The effects are amazing. Right away I noticed a reduction in my pain, but after a few weeks of taking the oil everyday, I started noticing other things – my swollen belly is gone, I am in a better mood all the time, my nausea isn’t nearly as intense or as frequent, and I’m not so tired everyday.

I can’t imagine what my life would be like without cannabis. I can focus on being a mom now. I had lost so much time with my daughter because of this disease. Cannabis truly gave me my life back. If I could pass along one piece of advice to someone suffering right now, is don’t let your fear control you. If I hadn’t been so scared of being judged, I could have had so much more time with my daughter. 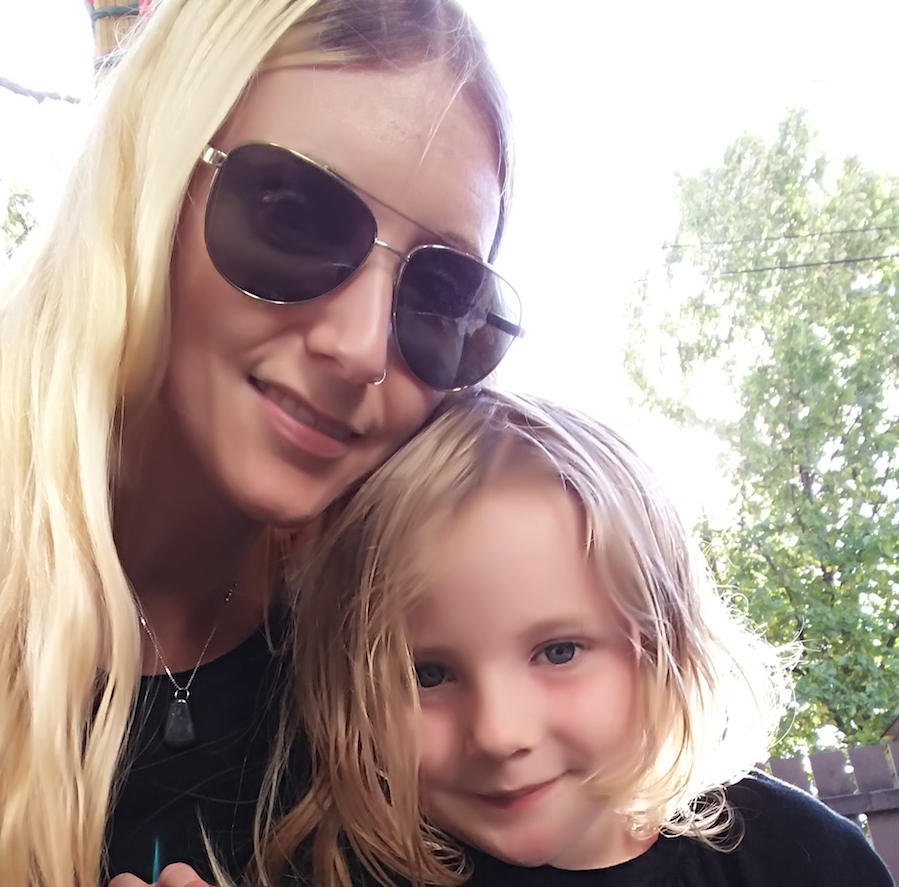 Linn, pictured with her daughter.

Interested in exploring your medical cannabis options for endometriosis or other conditions? Book a free online consultation with a Natural Care prescriber today, or call 1-888-671-8022 with your questions.