Weed During Pregnancy: What the Research Says

Most doctors advise against consuming cannabis when pregnant. However, there are many mothers who have used it during their pregnancies and reported no ill effects for either themselves or their children. Regardless of outcomes, the Journal of the American Medical Association reports that marijuana usage rates among pregnant women in Northern California have been rising steadily since 2002.

So is cannabis safe for pregnant women and their babies, or not? The truth is that there simply hasn’t been enough research to say, and medical practitioners will always advise on the side of caution when it comes to mothers and babies.

For the most part, expectant mothers who use cannabis therapeutically do so to curb nausea and morning sickness. Cannabis has antiemetic (anti-nausea) properties and some view it as a natural alternative to Diclectin, the only-FDA approved medication on the market for morning sickness sufferers, revealed in a 2017 study to be far less effective than previously thought.

But just because cannabis is an effective anti-nauseant does not mean that it is safe to consume when pregnant. Studies have shown that cannabis ingestion can be linked to birth defects and complications, including anemia, lower birth weights, and even neonatal intensive care, as well as cognitive and memory issues in some children’s formative years. “We are just scratching the surface in terms of understanding cannabis use in pregnancy,” explained Dr. Marcel Bonn-Miller, a researcher at the University of Pennsylvania Perelman School of Medicine, to Reuters last year. “The more we study cannabis use during pregnancy, the more we are realizing how harmful it can be.”

However, it should be noted that many of these studies include data from expectant mothers who had also ingested tobacco, alcohol and other substances as well as cannabis. For this reason, it is extremely difficult to determine whether cannabis is to blame for some of these birth complications, or whether its use might indicate a greater propensity for risky behaviour. 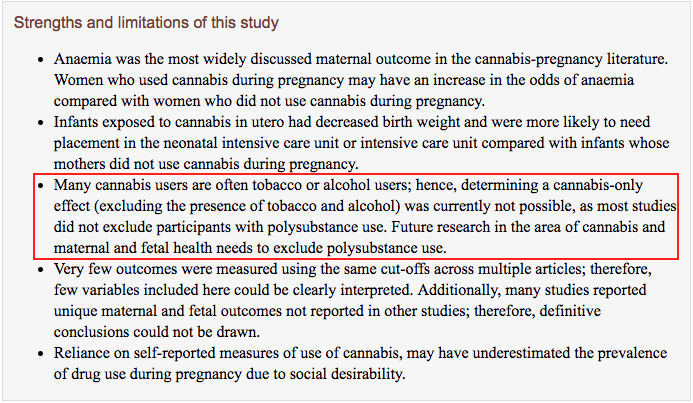 The Strengths and Limitations section from a BMJ-published prenatal exposure to cannabis study.

Clearly, there are a lot of unknowns when it comes to cannabis and pregnancy. And there is a desperate need for more research to be conducted on the subject, given that some studies have estimated between 9 – 27 per cent of women in the U.S. use cannabis during their pregnancies.

Unfortunately, drug studies for pregnant women are already ethically complicated because of the potential for fetuses being harmed in the process. This ethical barrier applies to all types of pregnancy studies that test over-the-counter medications, prescription drugs, street drugs, and even certain types of food. And since cannabis use is still stigmatized – or illegal – in many places, it can be hard to find mothers who will admit to cannabis use during pregnancy; even self-reported studies are limited.

Because of this, the safest option for expectant mothers is to refrain altogether from using cannabis when pregnant. Cannabis consumers who are pregnant, or pregnant women who want to explore medical cannabis as a treatment are advised to speak with a cannabis-aware doctor to get the latest research-based insights.